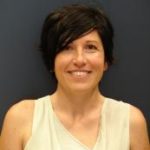 Raquel Ferrer-Lorente obtained her Ph.D. at the University of Barcelona in 2007 for her work “Modulació farmacològica de l’oleoïl-estrona sobre la ingesta i la composició corporal” participating in preclinical studies of the development of oleoyl estrone as a drug for the treatment of obesity. This work was awarded with the extraordinary doctorate prize.

After receiving her Ph.D., she joined the research group led by the distinguished Prof. Badimon, integrated into the Cardiovascular Research Center (CSIC-ICCC) (2007). Here, Dr. Ferrer-Lorente was awarded with a postdoctoral fellowship from the JAE-Doc Program at Consejo Superior de Investigaciones Científicas (CSIC) (2008-2011) and a postdoctoral contract Sara Borrell from Ministerio de Ciencia e Innovación-Instituto de Salud Carlos III (2011-2015). During this period, she focused mainly on the field of stem cells. Specifically, she focused on the phenotypic and functional characterization of cells derived from white adipose tissue (ASCs). She conducted research studying the impact of obesity and type II diabetes on the angiogenic potential and regeneration of ASCs and the use of ASCs as a tool for studying the molecular mechanisms controlling adipogenesis and expandability of white adipose tissue allowing the identification of potential therapeutic targets.

From January 2014 to May 2015, Dr. Ferrer-Lorente carried out the stay related to her Sara Borrell contract at the Institute for Bioengineering of Catalonia (IBEC), specifically in the group of “Control of stem cell potency” led by Prof. Raya. During this period, she analyzed the angiogenic potential of the induced pluripotent stem cells (iPSCs).

Dr. Ferrer-Lorente joined the Center of Regenerative Medicine in Barcelona in July 2015 with a postdoctoral contract of the Biomedical Research Networking Center, Bioengineering, Biomaterials, Nanomedicine (CIBERbbn; Instituto de Salud Carlos III). Since 2020, she works as Technical Coordinator at P-CRMC.