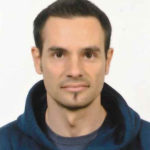 Loris Mularoni hold his Bacherlor in Biology (2004) from the University of Bologna (Italy) and a Ph.D in Bioinformatics (2008) from the University Pompeu Fabra (Spain). During his Ph.D training he acquired expertise in the computational analysis of repetitive elements in many vertebrate genomes. In doing that he learned to program in two programming languages widely used in science, Python and R. He carried out his first postdoctoral training at Johns Hopkins Hospital (USA) where he gained experience in the analysis of NGS technologies. Here he collaborated closely with experimental researchers to analyze the insertion profiles of different DNA transposons and retrotransposons (Hermes, Sleeping Beauty, Ty1, PiggyBac) in different organisms by developing the appropriate algorithms and analysis. In 2011, he joined Jorge Ferrer’s group, at IDIBAPS where he built up his knowledge in epigenetics and he developed an interest in regulatory genomics and in the differential allelic expression of these regulatory regions. In 2014, he joined Nuria Lopez-Bigas’ group‚ first at PRBB and then at IRB. In her lab, he matured an experience in cancer genomics and he developed new algorithms to dig into unexplored non-coding regions of the genome to identify non-coding driver mutations. Since 2019 Loris Mularoni works as a Bioinformatics Specialist at CMRB, where he provides bioinformatic support to various experimental groups.