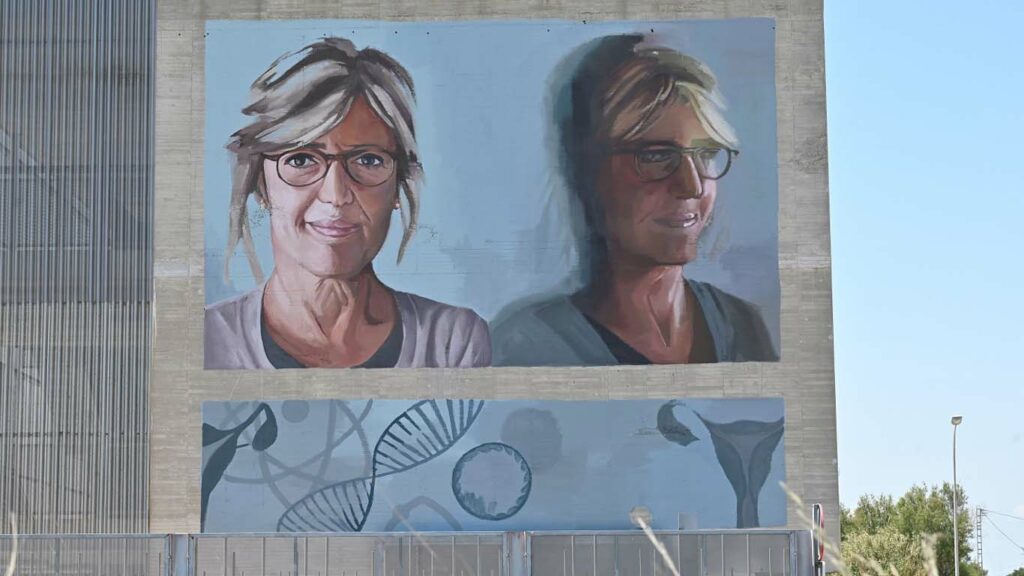 On July 12, 1984, the first girl conceived by in vitro fertilization in Spain was born in Barcelona. That baby was named Victoria Anna, in honor of her scientific mother, IDIBELL group leader Anna Veiga. Veiga participated in the team led by Dr. Pere Barri and achieved this milestone in Spanish medicine. Today she is the protagonist of a new mural of the Dones de Ciència project, promoted by the Polytechnic University of Valencia (UPV) and the Las Naves innovation center of the Valencia City Council.

From now on, anyone who comes to Pinedo beach will be able to see it on the facade of the public school in this Valencia district. The work of the artist Marta Lapeña (Ólvega, Soria) is the mural number 27 of a project that continues to grow, filling Valencian educational centers for more than three years with science and art in feminine terms.

In the mural, a portrait of Anna Veiga stands out, accompanied by a second image with the reflection of her figure, “as a metaphor for everything she projects as a woman and as a scientist and everything she has contributed to society,” says Marta Lapeña. In addition, it includes symbolic references to Dr. Veiga’s research in stem cells and assisted reproduction.

During the inauguration at the CEIP Pinedo, Anna Veiga expressed her gratitude to Marta Lapeña and the entities that has promoted this project. She stated “how important it is to continue motivating children to know the world of research and to wake up vocations, starting from the base to get future scientists. In this sense, this initiative seems fantastic, especially because relying on art makes it much easier for the little ones to approach science”, Veiga pointed out.

The Catalan biologist has also pointed out that “not so many years ago, those who dedicated themselves to this exciting world of research were considered a rare bird, but happyly that has been changing. I wish that in the future it will no be necessary to emphasize that a woman is dedicated to science”, Veiga pointed out.